Skip to Accessibility ToolsSkip to ContentSkip to Footer

Thanksgiving. It’s my favorite holiday - way beyond Christmas which has become so commercialized it’s no longer recognizable to me. The Christmas decorations used to go up sometime after Thanksgiving and, even then, it was slowly but surely. Now – in my town and others near us here in northern New Jersey – decorations start to go up November 1st – the day after Halloween. And when I say they go up, I mean that the companies people have hired to put up their Halloween decorations are taking them down and begin stringing the lights along the roofs and rafters.

We’re simple. We do our own decorating for all holidays. That’s always been part of the fun. But apparently, no more. Families around here spend hundreds of dollars to decorate their homes for Halloween and Christmas. 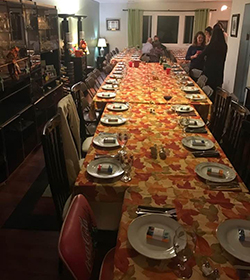 So far, they’ve left Thanksgiving alone. Apart from the spare pilgrim, a couple of blow-up, 12-foot-tall turkeys, it’s still pretty tame when compared to the other holidays. My father was one of three children. Between himself, his sister and his brother, there were 21 children (Irish families, don’t you know!). And then most of us got married and grandchildren came along.

Shortly before we lost my dad, his sister and his brother, our last grand finale Thanksgiving had 55 guests – that’s right; 55 brothers, sisters, cousins, husbands, brides and lots and lots of children.

Most of our family had not moved too far away

My cousin and his wife assumed the responsibility of “the feast” when my aunt could no longer host. It meant a drive that was a little longer and quarters that were a little more crowded. I don’t know if it’s a tradition celebrated by my family alone but there was certainly a rite-of-passage feel when you were younger and there came a certain Thanksgiving when you found your name placard at “the adult table.”

It was a marvelous feeling. The “kids’ tables” were usually a few card tables sitting next to each other, which constituted the base of an “L” if you can picture it, with the stem of that letter being where the adults sat. The “L” began in the dining room, traveled through a short foyer and then turned (the base) in the living room. Most of our family had not moved too far away. One or two first cousins moved to Los Angeles and 3 aunts and uncles had retired to Florida. But the great majority of us lived within a 50-mile radius of each other although we did not get to see each other often enough (in my opinion anyway).

The sounds of the holidays

“Remember the time……” – “She was dating……” - “And your grandmother told your grandfather, in so small way that he should never…” These were the sounds one would hear (and still hear) when the family (if you’re as lucky as me and still have one) gets together. And that is what I think Christmas probably started off as. But – I think it’s lost its way because of the pressure to “shop til you drop.”

Thanksgiving has always been attractive to me because all it’s ever required of me, in my 65 years, is to drive, eat and do a few dishes. Aside from that, it’s all “gravy” (I know – bad pun). But I’m serious. There’s zero commercialism and a lot of love. And, aside from carrying my oxygen in when we arrive at my cousin’s house and out later on as we leave…

I never think about my COPD.

Handling the Holidays with COPD

0 comments
This article represents the opinions, thoughts, and experiences of the author; none of this content has been paid for by any advertiser. The COPD.net team does not recommend or endorse any products or treatments discussed herein. Learn more about how we maintain editorial integrity here.

Do you find it difficult to enjoy the holidays with COPD?