The Story of My COPD 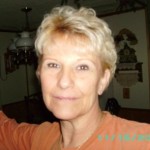 Hi. I was diagnosed with COPD about 11 years ago. I was devastated when I found out what it was. I quit smoking immediately and that lasted for 8 and a half months. My doctor put me on Sprivia and I gained 40 pounds of fluid in a month which made my breathing even harder. I quit taking it on my own because I knew that was causing the water weight gain. My doctor had no clue what was causing it and did nothing about it.

I was working as a cashier in a local grocery store and my manager told me to just have a cigarette…so I did. I could breathe as soon as I took that one puff. The water weight gain went away too. It was so bad my legs and ankles indented 2 inches into my skin when I pushed on them…my toes were separated because they had so much fluid they wouldn’t go next to each other.

I started another job working in housekeeping in a hospital because the store went out of business. I started working with industrial cleaners and was still smoking. I was having a harder and harder time breathing. I then went to see another doctor. This doctor told me when I was first diagnosed my COPD wasn’t even that bad to have been put on an inhaler like that. They said it may have done some other damage. I then just had a temporary inhaler to use when I needed it. I worked for the hospital for 3 years. So I could hardly breathe at all. I went to another doctor…and he said I need chest x-rays and a breathing test to see where we were with the COPD. I was then diagnosed with COPD with emphysema. I ended up in the hospital for five days with acute pulmonary failure.

I left the hospital on oxygen #3. I quit smoking again. I had to live with my daughter and she, my granddaughter, and my granddaughter’s boyfriend all smoked. You know how hard that is when you are quitting? I would take the oxygen off and sneak a cigarette with my daughter every once in a awhile. Landed up in the hospital again, this time for ten days. They even had to use helium on me because the oxygen alone wasn’t working by itself to help. This time I left the hospital on oxygen #4.

I moved into my own place and have been trying to quit smoking again. Doing better this time just can’t go cold turkey. I smoke 3-4 cigarettes a day. It’s getting easier, down to smoking a half…then the other half. Soon hoping it will be for good. I am on disability, live alone, have no one visit me hardly and no one to talk to. So this is very hard to quit because I get frustrated. I am on medicaid for now until medicare kicks in in August.

So far medicaid won’t pay for the patch so I could quit. I don’t understand that at all. My doctor even filled out a prescription for an aid to quit…they wouldn’t pay for it and it was too expensive for me to pay. It’s hard living on $815 a month. I know I have to quit and I want to quit…I know I will get there soon. I have no choice in the matter – it’s either that or die…and I plan on being here for some time. I am only 62 years old. Thank you for listening.