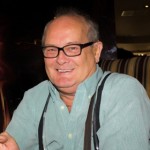 When I was first diagnosed with COPD in 1987 I gave it little thought. Yes I had got a little short of breath. But worse was the bronchitis. I was submitted for tests to see what the problem was, then diagnosed as having COPD. No information was offered, although to be fair I did not ask any questions either. I walked away with a prescription for an inhaler if I got breathless. I then carried on with my life in complete ignorance to the deterioration that was slowly happening to my lungs.

Even though becoming more breathless as years passed I never really worried.

Workmates would ask why I breathed funny, which puzzled me as I never though ‘I breathed funny’.. Little knowing COPD was having more of an effect on my lungs than I was aware of. That I was breathing heavy and mouth breathing to compensate. Maybe ignorance was bliss but I had work to do. I was at that time leading a very active life both at work and play. But without realizing was compensating for more shortness of breath. Hiding my breathlessness when possible. Secretly sucking on my inhaler when out of sight. I did not need a concerned employer deciding I was not up to my job anymore.

My work before retiring through COPD often had me in enclosed spaces. Tucked away in near darkness with a torch, crouched with a low overhead ceiling. This is however one of the worse positions for us with COPD to be in as the lungs cannot expand. And we are limited in lung capacity anyway. Taking frantic puff of my inhaler I would emerge hoping non would notice my breathlessness.

I loved nothing more than walking up hills and mountains where I live in Wales UK.

And remember as though yesterday the last mountain I clambered up. Five hundred foot below the summit I was walking ten paces then stopping. It felt like I imagine it would be to climb Mount Everest. I consoled myself with the thought the trip down would be easy. I made the summit but the trip down wasn’t easy. I realized I had just walked down my last mountain and would never again hike up one. Knowing that doing that one more time might well be my last, and give me a heart attack. I had reached ‘the bump’. I will write about ‘the bump’ at a later time. But knew I had reached the stage where my life was about to take a massive change.

I had a year off until told by my company doctor that I would not be fit enough to work again, and was let go from my employment.

I was now disabled with a quarter of lung function remaining.

Could not do what I loved anymore – hill climbing or walking out in the wilderness as I called it. I was losing everything I treasured. When I was a child my nickname was smiley. I smiled a lot, saw the funny side in everything, and had a very optimistic mind. This had never left me and was probably my savior. I worried about my wife Would she still want me. Still love me. Would she want to leave me for another man. Would she still want a man who had to contend with ‘the beast’, as I now called COPD. I asked my wife to sit and explained she had not brought into becoming a carer, and said I would understand if she decided to leave and start a new life with someone else. My wife assured me she loved me and was staying. And during the seven years since we had that chat has been a treasure and indispensable to me. My walking became difficult with me having to stop often to catch breath so brought a mobility scooter. This provided a huge relief as I could go out with Lynne, and she no longer had to keep stopping to wait for me.

Soon after retiring I started writing a blog about COPD.

Writing had long been a hobby of mine so was a perfect outlet. I have found writing about COPD therapy for my soul. A way to express myself.

I joined our local Breathe easy group, a part of the British Lung Foundation to meet other ‘wheezers and puffers’. Then became involved with the British Lung Foundation, attending events, helped with publicity. I was enjoying my life as my diary started to become full, and I felt something useful was being achieved. Even if I was using oxygen for mobility at this time. A whole new world opened up as I sought other outlets that would keep me active. In the end becoming involved with steering committees, government initiatives, and in many projects as a patient representative. With delight I found I was accepted at professional meetings involving highly trained people. And that my ‘nose hose’ that delivers my oxygen even appeared to be invisible at meetings and venue’s. I was proud to be a nose hose ambassador as I learned of many that refuse to leave their home with a cannula due to false pride.

This last seven years I have been at ‘end stage‘. Having a good life. Yes not easy at times. I have done stupid things that have made me suffer. And sometimes even repeated the same stupidity. I am sure to write about that at a later time. I have also had a lot fun. Laughed a lot. And thankfully through my volunteer work achieved a lot too. One is that everybody in Wales UK will be told all about COPD. What it is, what to do when having an exacerbation, most important what not to do, breathing exercises and the importance of keeping the body moving, and heaps more.

If you are at ‘end stage’. Don’t despair. Life is not over.

It is just more challenging. And when you are told you have ‘end stage’, that does not mean the curtain is closing to your life.

I have lived a long life with COPD. And will die with COPD. Not because of it. I am not shedding my mortal coils soon. There is simply too much to do. And so much to enjoy. Including looking into and commenting on COPD.net’s Facebook page.

If you have a story to tell, I would love to read it. And look forward to reading many more stories on this page. For now take care, keep smiling, and most of all, Breathe easy.