What Could Have Caused My COPD?

Smoking and second-hand smoke aren't the only causes of COPD. There's much more to it! In a recent Facebook post, we asked our community members what they think caused their COPD. Let's dive into the responses and take a look at these potential causes and risk factors.

Causes and risk factors of COPD

Kathi MacNaughton
15% of the COPD cases worldwide have been found in a variety of studies to be related to long-term exposure to lung irritants on the job. A study published in Thorax journal has found that the number of occupational COPD cases may actually be closer to 21%... read more. 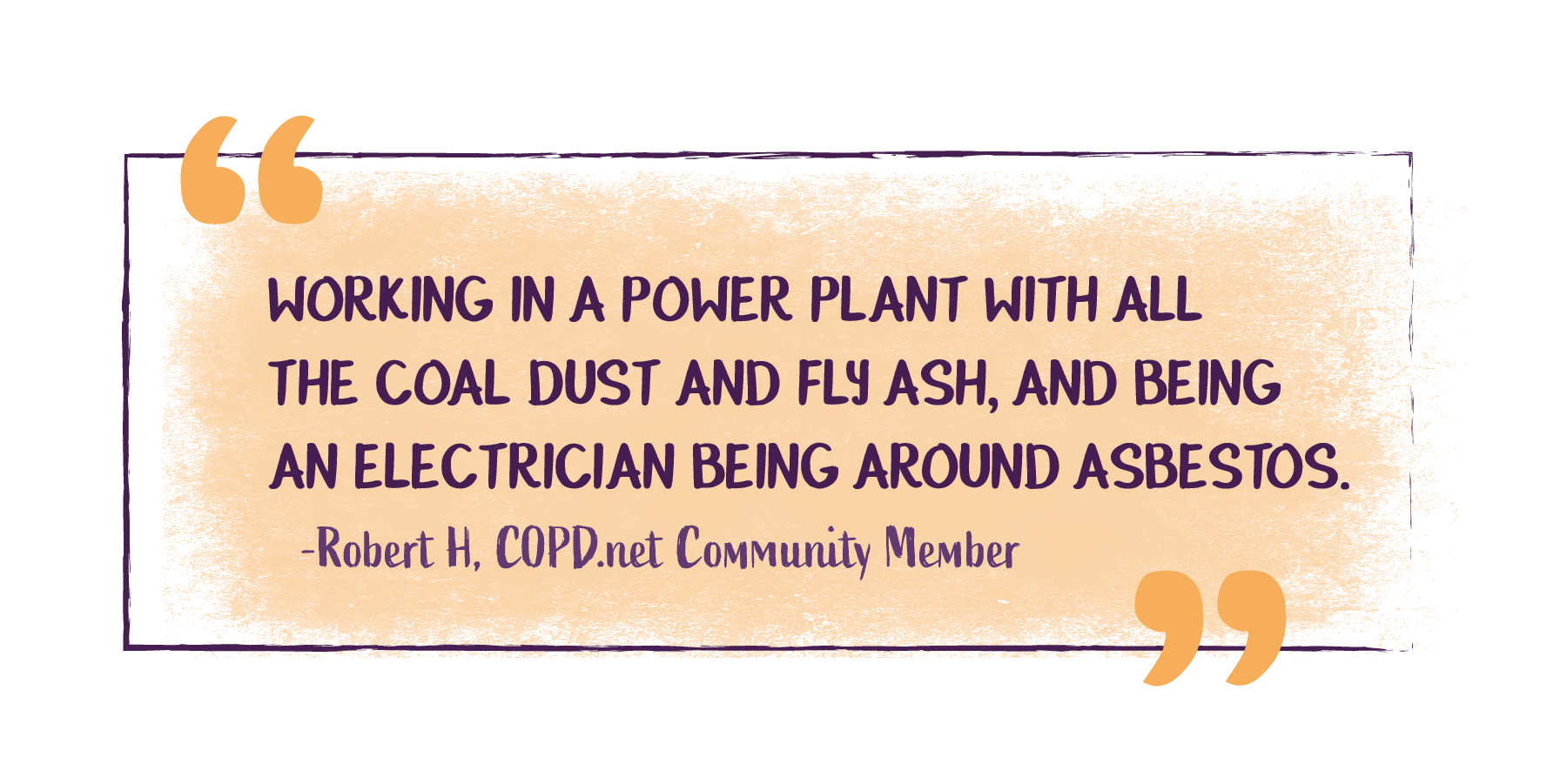 COPD.net Editorial Team
More medical conditions were added to the Agent Orange Act of 1991 as recently as 2010 and more conditions are being considered as future additions, including COPD. The Army Chemical Corps Vietnam-Era Veterans Health Study is looking at the links between Agent Orange exposure, COPD, and high blood pressure, among other connections... read more. 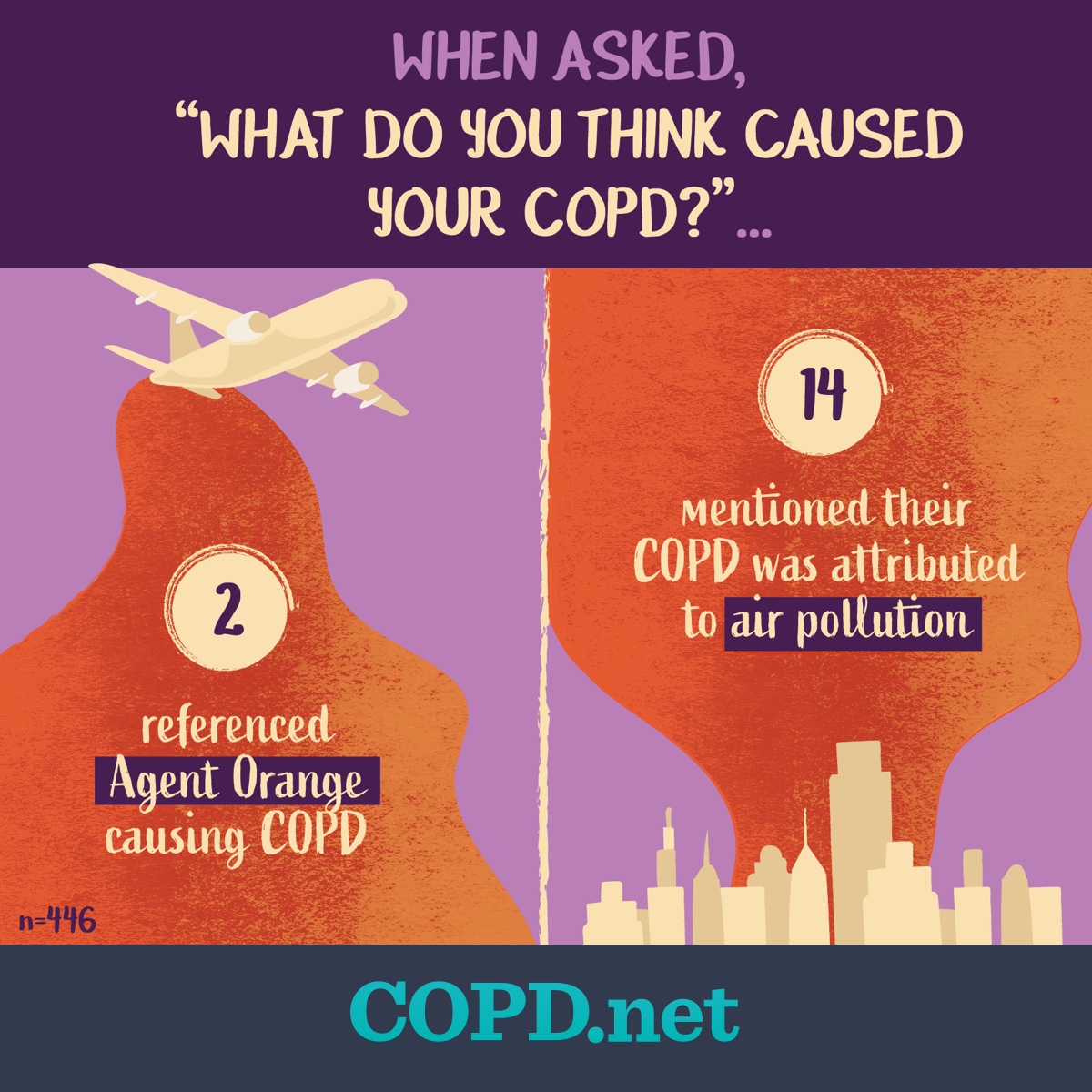 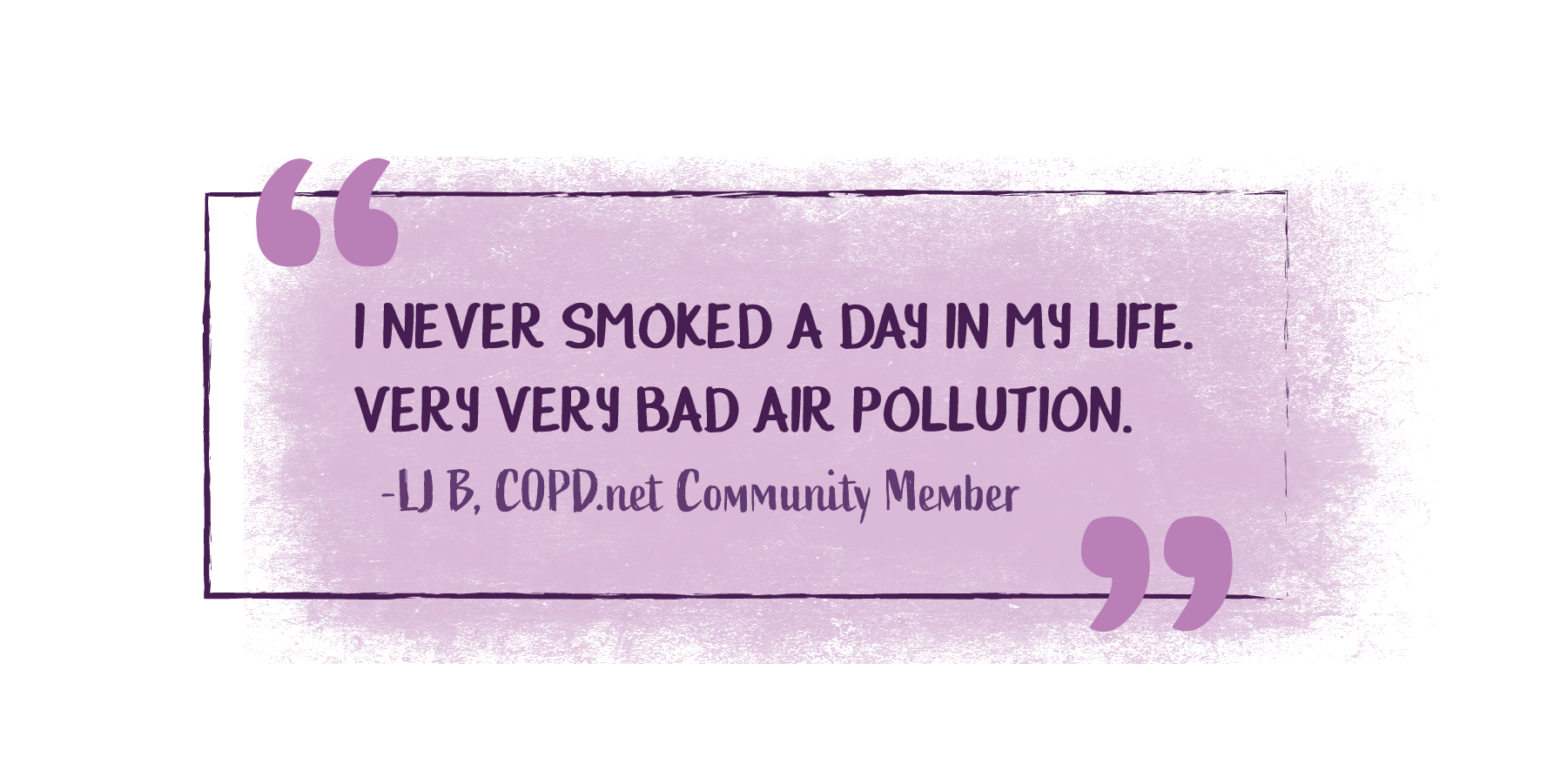 John Bottrell
There is a rare form of genetic COPD. It’s the only subtype of COPD known to be hereditary. It’s caused because you have a mutated gene. The gene that is mutated is the alpha-1 antitrypsin gene. When you have this, you may develop a rare form of COPD. It’s called alpha-1 antitrypsin deficiency. It’s often called genetic COPD... read more. 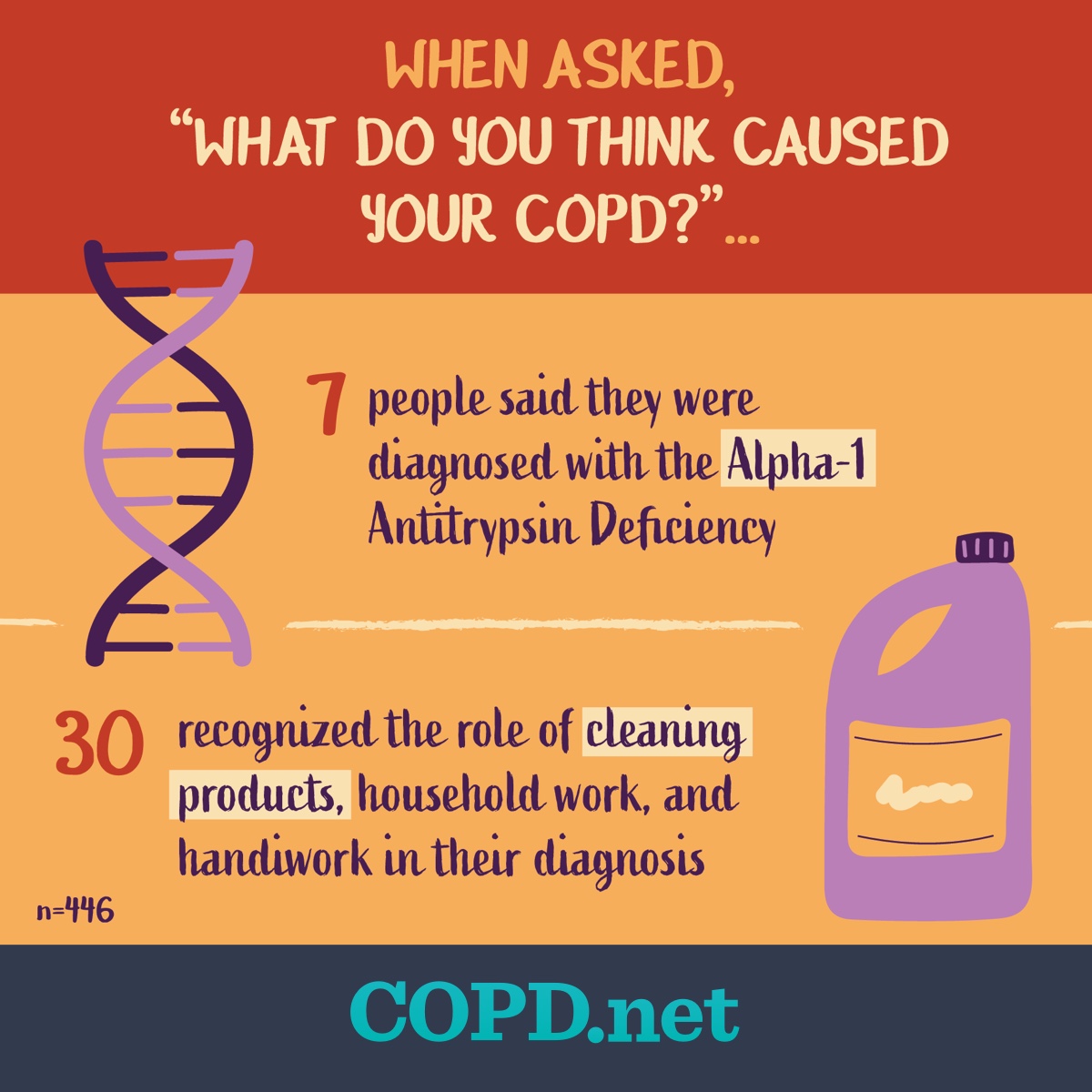 COPD.net Editorial Team
A study in 2018 in the United Kingdom looked at which jobs put people most at risk for developing COPD. It found that people working as either industrial or domestic cleaners were at significantly increased risk. Another study showed that women who clean as their job had a faster decline in lung function over time than women who did not use cleaning products as often... read more. 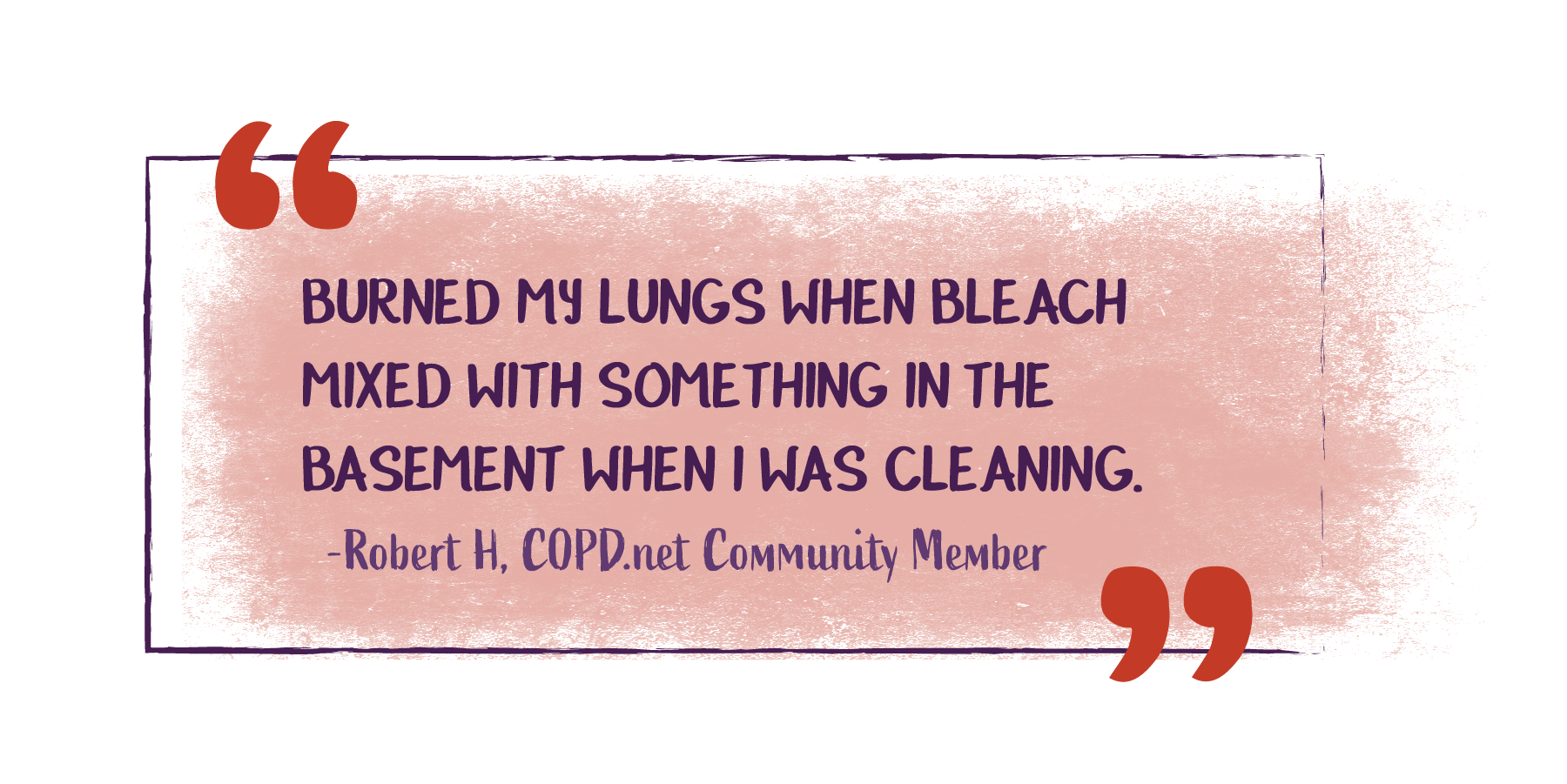 COPD.net Editorial Team
One study found that people with asthma were up to 12 times more likely to get COPD during their lifetimes than people without asthma. However, scientists are not sure if asthma itself can be a cause of COPD. Instead, it might be that asthma and COPD have shared risk factors. This means that people with these risk factors are more likely to develop asthma and then COPD, even though it is not the asthma that causes the COPD... read more.

What do you think caused your COPD?

Could it have been one of the above risk factors, smoking, or something else? We want to hear your story!

This data and these quotes reflect the results of a Facebook post where 446 people responded. Results were pulled on April 24, 2020.