Quality of Life with COPD By The Numbers

Managing the symptoms and treatment of COPD can take its toll on an individual’s quality of life. We found this to be especially true with the 1,000 respondents we surveyed during our COPD In America study. The following are a few facts we learned; see how your experience compares! 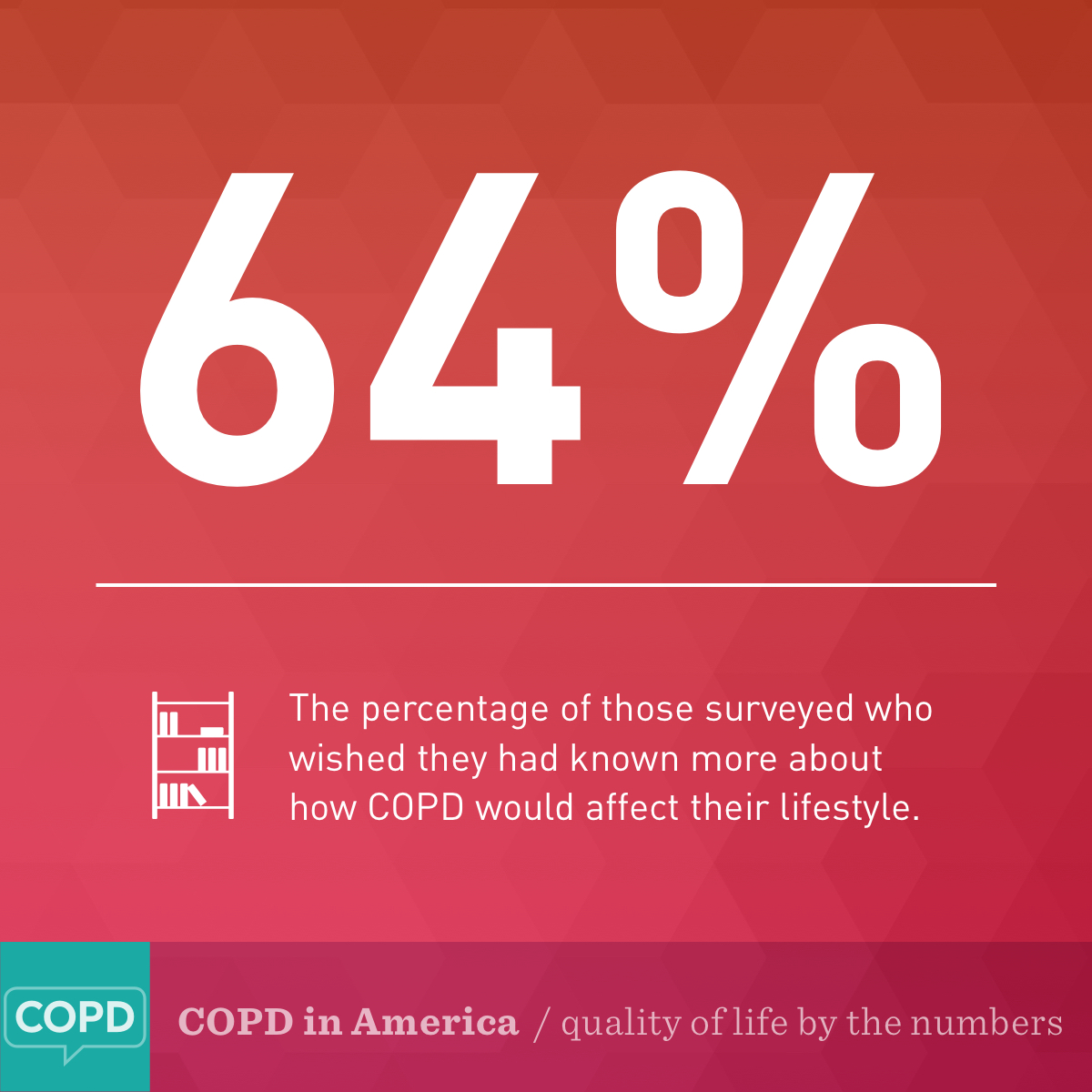 64%
Wished at the time of their diagnosis that they had known more about how COPD would affect their lifestyle. 36% of individuals wanted to know how to handle the stigma of having COPD and 17% were seeking information on support groups or other resources for emotional support.

Only 6%
Of those surveyed indicated that their daily activities are NOT affected by COPD. Whereas 87% indicated they are unable to do as much as they did before having COPD. 67% cited difficulty getting things done around the house as well as an inability to exercise or participate in strenuous physical activity. 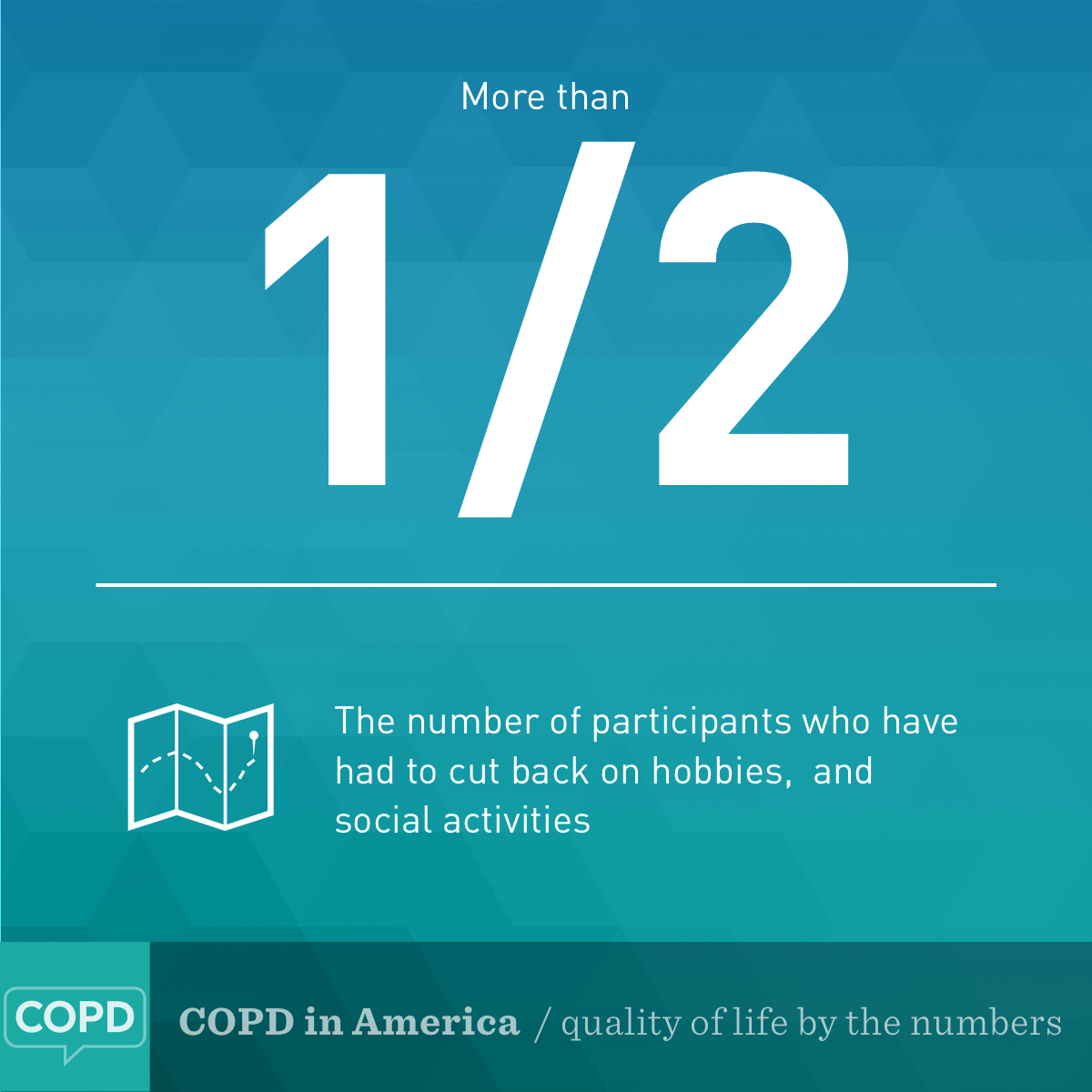 More than 1/2
Have had to cut back on participating in hobbies and activities that they enjoy (57%) and 59% find they have a less active social life.

65%
Are afraid of the long term complications of COPD. Along with this fear came blame and regret-- 67% blamed themselves for having COPD and 78% wished they had done things differently in the past.

29%
Feel isolated or alone, with 21% feeling as though others resent that they are unable to do as much with them. Additionally, almost a 1/3 think that others do not believe their COPD symptoms are serious (32%). 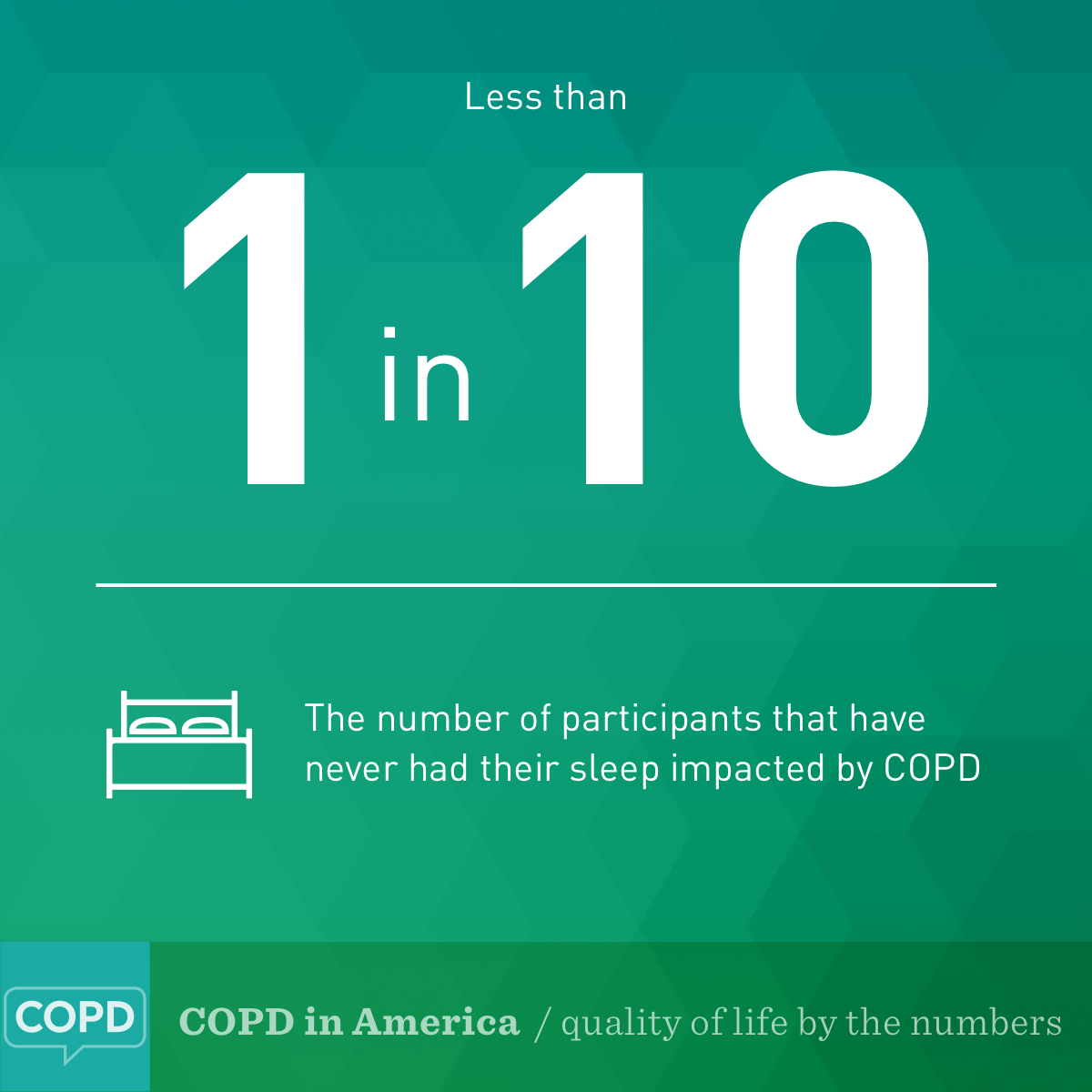 Less than 1 in 10
Never have their sleep impacted by their COPD, with 89% being affected in some capacity. 79% of all surveyed indicated that they frequently experience fatigue or feel tired.

1 in 3
Have a caregiver who is involved in the management of their COPD; this individual is typically their spouse (61%) or their child (34%). Caregivers were relied on most for emotional support (71%) and to help with day-to-day tasks and household chores (68%). But 19% of those surveyed wished they had more help from family and friends.

43%
Of those surveyed reported that COPD has had a financial impact on their life. 22% of individuals were employed in some capacity at the time of the survey, but only 15% were employed full-time. 21% of employed individuals indicated they have had to limit their work schedule due to their COPD. Given the impact of COPD, it’s not surprising that 28% of individuals surveyed were on disability and 40% were fully retired.

Over 1/3
Wished there were more COPD resources or services available in their community (34%). 12% of those surveyed have participated in a COPD support group at some point in their journey, in which 9% were currently involved and 3% had been in the past.

Only 1%
Of those surveyed were involved in COPD advocacy efforts--their main reasons for participating was to raise awareness and help find new and better treatments.

It’s easy for people to think of COPD as just coughing or shortness of breath, but it’s so much more. The impact it has on an individual can span every aspect of life and is not to be ignored. With November being COPD Awareness Month, these findings should be discussed now more than ever!

Guess the COPD In America Statistics

Tips for Improving Communication With Your Physician

Have you taken our COPD In America Survey yet?